The end of a dream

Euro 2022 in England has come to an end in the semi-finals for Corinne Diacre’s players, beaten on Wednesday evening (1-2) by Germany, thanks to goals from an unstoppable Alexandra Popp.

They dreamed of making a little more history. In the last four of a European Championship for the first time, Les Bleus faltered on Wednesday in Milton Keynes to Germany (1-2), who will aim, on Sunday against England at Wembley, to claim a ninth title in as many finals. The experience and efficiency of Alexandra Popp, scorer of her 5th and 6th goals in the tournament, eventually saw off Corinne Diacre’s team, who had commendably shown their mental strength to equalize before half-time, following a moment of inspiration from Diani which found the net thanks to a rebound off the German goalkeeper. Next on the agenda for the French women's team? The beginning of September will see them play out the last qualifying matches for the 2023 World Cup, for which they are already qualified.

Four days after qualifying against the Netherlands (1-0 AET), the French team lined up with the same starting XI in their semi-final against Germany, while coach Corinne Diacre decided to stick with her tried and tested 4-3-3 formation. For their first semi-final in the European Championships, Les Bleues left most of the possession to the Germans, who dominated the first half and opened the scoring through the inimitable Alexandra Popp (1-0, 40), with the 100th German goal in the final stages of the Euros. However, France responded accordingly by levelling just before the break, with Kadidiatou Diani taking a chance from outside the area which found the back of the net thanks to firstly the post and then a cruel rebound off the German goalkeeper (1-1, 44). 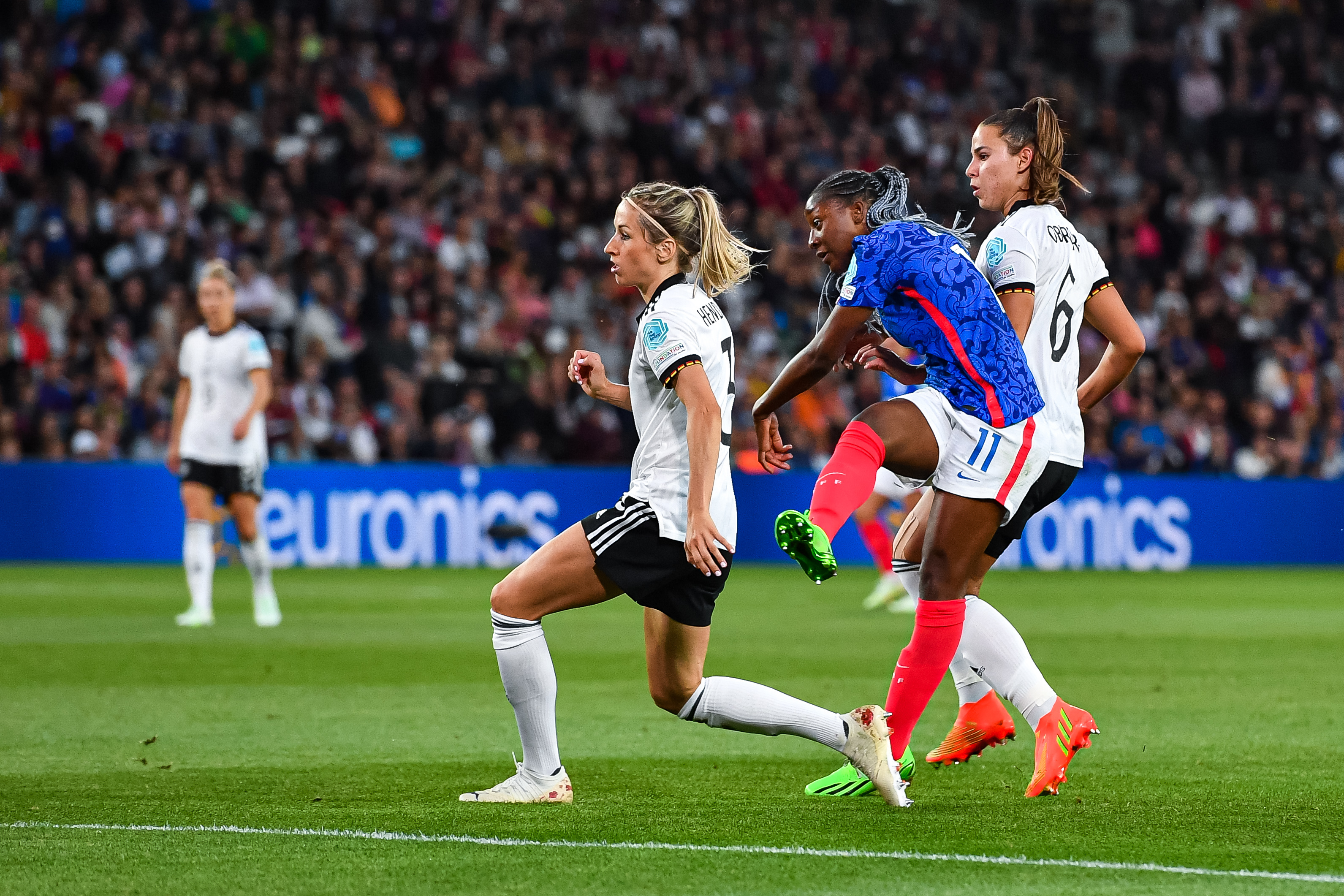 At half time Melvine Malard made way for Selma Bacha, who had made a positive impact when she came on in the game against the Dutch. The objective? To Play more deeply and to shore up the defence for a busy second period. The Lyon defender quickly proved to be a dangerous presence, going close herself on 58 minutes, and then again 5 minutes later, before serving up a chance for Wendie Renard, whose header was kept out by Frohms. The German ‘keeper also managed to block an attempt by Diani on 67 minutes.

A quarter of an hour of French pressure had passed without fruition. The opposite was true of Germany, who managed to find a breakthrough though a familiar pairing. Huth in the role of provider, finding the head of Popp, who beat Mbock to the ball in to make it 2 – 1 on 76 minutes. Les Bleues gave everything right to the end, including a Bacha chance with ten minutes to go, but failed to find an equaliser, and saw their dream of reaching the final eventually slip away. 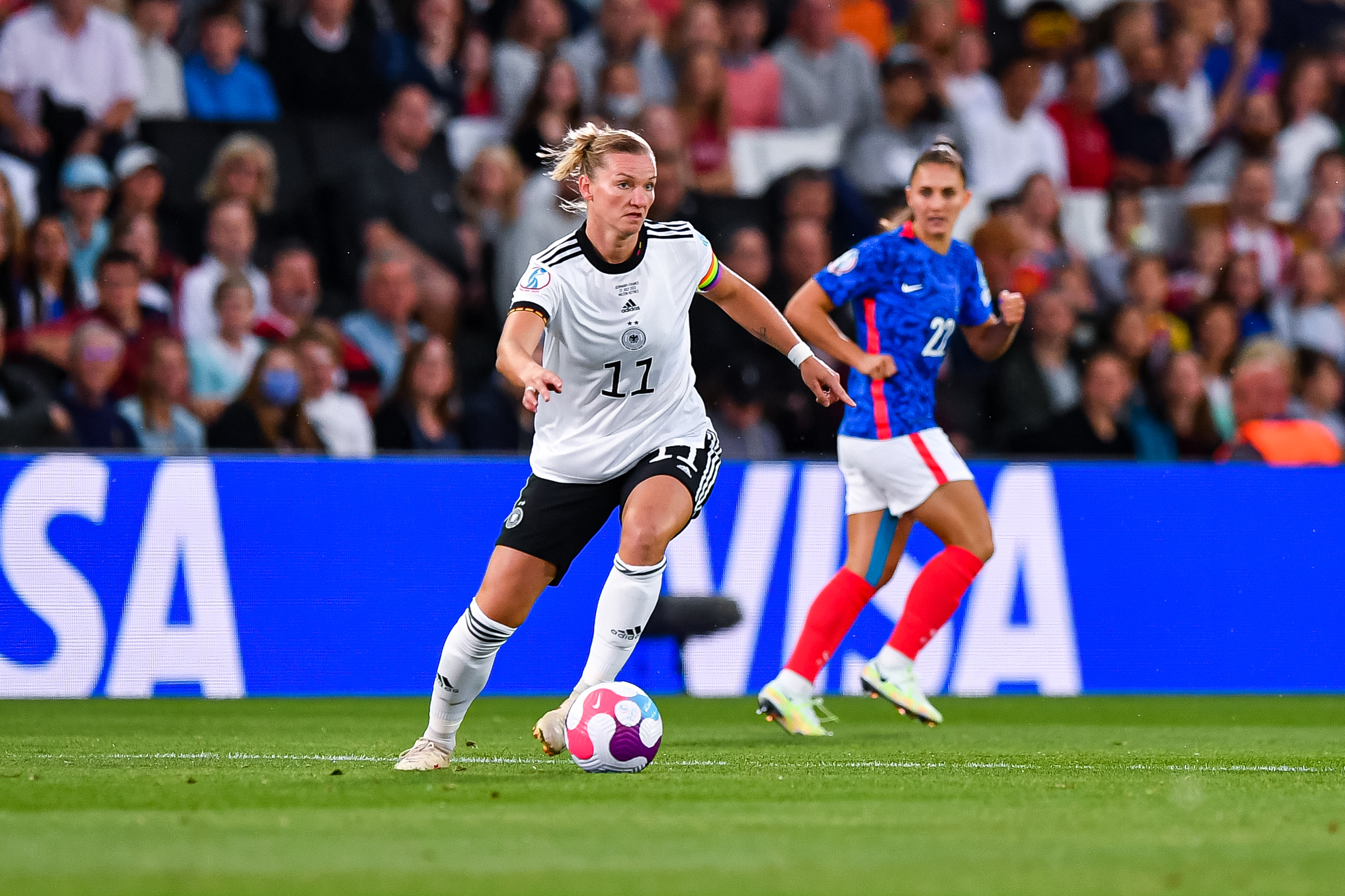 Alexandra Popp scored the 100th and 101st goals for Germany in the final stages of a European Championships, a record (photo Baptiste FERNANDEZ / ICON SPORT).

9
Germany will play their 9th final in 13 editions of the Euros, at least 3 more than any other team. They have won every final that they have played so far.
3
France have lost their 3 semi-finals in a major tournament (EUROS + WC + Olympic Games), following the 2011 World Cup (1-3 against the United States) and the 2012 Olympic Games (1-2 against Japan).
1
Les Bleues benefited from an own goal for the first time in their history at the Euros, while Germany also conceded their very first own goal in the history of the tournament.
6
With 6 goals in 5 matches, Alexandra Popp became the first player to score at least one goal in 5 consecutive matches in the competition. She also equals the record for goals in the same tournament for a player (Mead in 2022 and Grings 2009).

- 1-0, Alexandra Popp (40, assist - Svenja Huth). From a cross from the right by Huth, Alexandra Popp beats Eve Perisset near the penalty spot and slots home past Pauline Peyraud-Magnin.

- 1-1, Merle Frohms (44th o.g.). After France recover the ball, Kadidiatou Diani is found outside the area. She turns and fires in the equalizer, with her powerful right foot shot hitting the post before bouncing in the net off the back of Merle Frohms.

- 2-1, Alexandra Popp (76th, assist - Svenja Huth). During a German attack, the French defence makes two decisive interventions. The ball is sent out to the right side where Svenja Huth crosses in to find Alexandra Popp. The striker beats the challenge of Griedge Mbock to head into the net

THE REACTION OF THE COACH :

Corinne Diacre: “We must pay tribute to this very strong German team. We gave everything, I think we have no regrets. The girls were good tonight, they gave everything they had. I'm proud of them, they didn't give up. What we did is good. This is still not enough today. We see what we are missing compared to the nations that are used to winning. We still missed that little bit of success in front of goal. One day it will come for us. Here, disappointment prevails. We had the ambition to go to Wembley, we didn't succeed tonight, but you must know that our opponent was stronger. The girls are disappointed, of course, we won't have to talk too much. We have to stay united as we have done from the beginning, and stay together”.