A near perfect start for Les Bleues

Corinne Diacre's team made a successful start to Euro 2022 by comfortably beating Italy 5 – 1, with Grace Geyoro bagging a hat-trick.

Whether it’s the World Cup or the European Championships, opening a campaign well in a major competition is never decisive but often important. A good start and three points on the board are key in building momentum for any team.

Facing an Italian team considered by many to be credible outsiders, France gave a performance in line with their ambition in the tournament and the status that they’ve acquired. Is it any surprise, however, given the dynamic that has grown throughout the team over the last three years, and which has seen them climb to third in the FIFA rankings behind the United States and Sweden?

The danger, after such a dominant performance and a perfect first half, punctuated by five goals and myriad chances, would be to get carried away. In this case it's worth remembering the save made by Pauline Peyraud-Magnin in the third minute, when the game was still goalless.

From there France were unstoppable, scoring five goals, including a hat trick from Grace Geyroro. Notably, the French players seemed incredibly fit, as Corinne Deacon had announced prior to the game. After the break, her players understandably lowered their intensity to see out the match 5 - 1. They will face Belgium on Thursday, when qualification for the quarter finals could already be guaranteed. What more could be asked of them?

5
France achieved their biggest win against Italy at the Euros. They became the first team to score 5 goals in the first half in a match.
11
Les Bleues have won their last eleven competitive matches, equalling their best run dating back to the period between September 2013 to June 2015.
50
This win is Corinne Deacon's 50th at the helm of Les Bleues in 60 matches. No French coach has ever reached this milestone in so few meetings.

THE PLAYER
Grace in a state of...grace

Her tears, following a knee injury three weeks ago during preparations for the tournament, are now only a dim and distant memory, and made way instead for a beaming smile.

Following an exceptional performance by Grace Geyoro this Sunday evening against Italy, she said: "I was injured at the start of the preparations, I felt better, I had chances and I put them away. It's nice. We will enjoy it for a little bit and quickly focus on Belgium", said the Paris-Saint-Germain player when speaking to TF1 after the match. After opening the scoring and taking the pressure off, as with any team entering a major competition, Geyoro added two more goals just before the break. No other player scored a hat-trick in one half in the history of the competition. 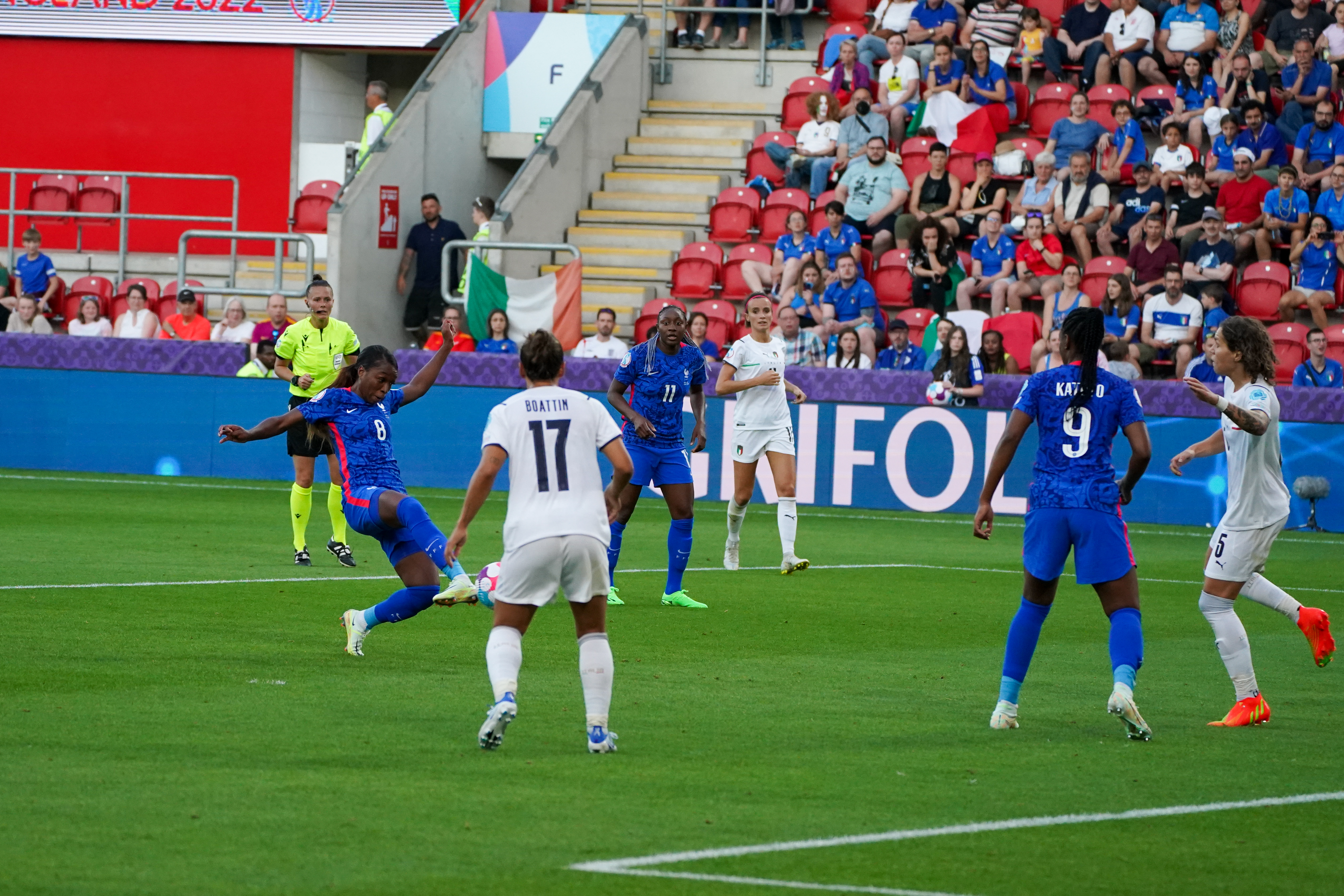 Geyoro also shone in midfield, winning a lot of balls and showing intelligent distribution. All in all, a superb performance (Tim GUIGON / FFF).

REACTION FROM THE COACH

Corinne Diacre: "We're going to have to stay focused and humble".

Corinne Diacre (French coach speaking to Canal +): "The first thing to remember is the victory and the three points. An almost perfect first half, a second slightly less so, by force of circumstance. We tried to keep the same level of intensity at half time, but it was so difficult after the first half that we played. We wanted to come out very strong, we did much better. We work with twenty-three players, all of whom can bring something to the team. I have to make choices regarding the starting XI, but all the girls are able to fit in. I told the players that they should have confidence in themselves because we have confidence in them, and they have worked very well. When you see the debut of Delphine Cascarino, it's just extraordinary. This is one of the things that we did not see before, and that the girls are doing today. They were able to do it but they did not know it. Now they know it. Now, we will have to stay focused and humble. We got off to a very good start in the competition, but we also know that we can quickly be caught. You have to stay calm, focused and keep working”.