The first of firsts

Designated to lead the "Olimpico" between Lyon and Marseille in Ligue 1 on Sunday evening (9:00 pm), Stéphanie Frappart recalls the most memorable moments of her ascent to the world summits.

"Forever the first", say the locals of Marseille, of the Champions League won by their OM in 1993, the first European Cup won by a French club. "Forever the first", Stéphanie Frappart could boast. But she is not that kind of referee, the first woman to have led men in a Ligue 1 match or a UEFA Super Cup final. The former AS Herblay number 10, who is starting her second full season with the French men's football elite, looks back on the biggest accomplishments of her career, and her pitch debut at the European Super Cup final.

"The courtyard of the primary school in Pierrelaye. The playground was perhaps a little larger than a handball court. I was not the only girl. We played at every recess. The level was homogenous enough that we were not put aside by the boys. I must have been 6-7 years old. The age when everyone starts playing football. Mixing is perhaps more natural at that age. I quickly turned to team sports, football rather than rugby, which I was interested in, too. I began playing, at the age of 10, with AS Herblay girls’ team. I played with the number 10 jersey. Herblay was the first team to play in the National 1B, the equivalent of the Second Division at the time. At the beginning, I played for the pleasure of playing ball and meeting up with my girlfriends. With time, I got a taste for competition. I was selected for the regional youth teams, I played in a national cup and ended up playing one or two matches with Herblay's first team".

"To learn the rules of the game I turned to my district at the age of 13. My initial focus was not necessarily on becoming a referee. In fact, it was not until I got into the theory of the sport that I started to referee U8 and U9 matches at my club. Somehow, I passed the test before the conduct. I then took on the job in a more formal way by working 11-a-side matches on Sundays, while continuing to play on Saturdays. It was when I went back to the Sports University that I had to make a choice. It was a bit much. I had become a Federation Young Referee and I felt I had more chance of refereeing than playing in women's football, which was much less developed than it is today. When I was 19 years old, I was appointed to referee Honorary Division matches and that made a bit of a stir. At that level, people were not used to seeing a woman with a whistle."

"In Le Parisien when I started refereeing matches in the Division d'Honneur, I was the woman who referees men, and that was how the media perceived me. That has not been the case for a few months now. Even among my colleagues, I am no longer seen as a woman referee. I am a member of a group, like any of them. And that is good. I would rather be judged on my skills as a referee than be the woman who referees. I do not want to be the attraction on the field. I have a skill and I want to use it for the game and the players. This is my mantra. For a long time, with each match, I made the headlines. The most beautiful recognition is to have blended into the panorama of Ligue 1 refereeing. I accept the good and bad, the praise but also the criticism."

2006 / Her first course at Clairefontaine

"At the time, we met at the beginning of July with all the federal referees. There were about fifteen women and we were in contact with referees that we saw on television. We were intimidated. We were entering the world of the big boys. We were always very well received. I never tried to copy any of them, for the good and simple reason that you cannot copy someone. You can be inspired by an attitude in each situation. But everyone has their own personality. I base everything on mine. I do not have and do not ask for any passes. On the physical level, I have a VMA of 21 and a lactic threshold of 16. This is also one of my strengths. The game moves fast in Ligue 1, players can be tricky and to dissect a situation, it is better not to be too far away. Being close to the action provides credibility to the decision in the eyes of the players. I pass the same tests as the men at the UEFA. For example, you must complete a series of six 40-metre runs in less than six seconds each. In terms of endurance, you must run a sprint of two times twenty metres at an average speed of 18 km/h, i.e. peaks of more than 20 km/h. This implies paying attention to diet and sleep daily. Strength training, injury prevention, speed, endurance... There is not a day that goes by when I do not train. My sessions are varied, I like it." 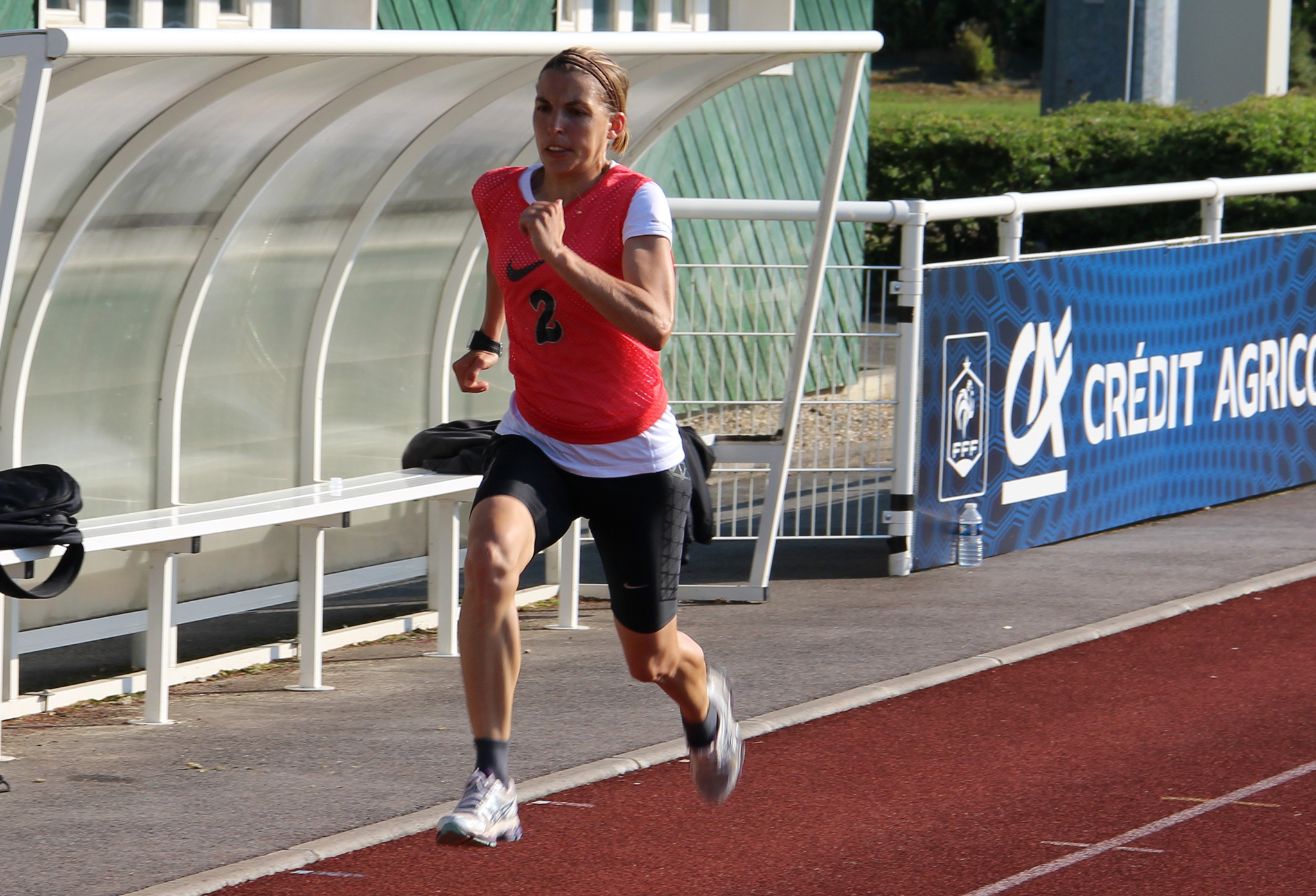 No elite refereeing without daily training for Stéphanie Frappart, here during a DTA workshop at the CNF Clairefontaine. (Photo FFF)

"This appointment was polemical. Nelly Viennot, Ghislaine Labbé and Corinne Lagrange had already worked as assistants, but we had never seen a woman at the centre. I felt pride, of course, but not too much apprehension. It was not my first match either, even though people thought I had arrived with the experience of refereeing only a few matches, when in fact, I had been refereeing for seventeen years. That first match went well. I was able to continue my career at this level quietly."

"I didn't expect to participate in this 2015 World Cup in Canada. There are four categories of referees at the UEFA. To go from category 3 to the Elite category, you have to go through category 2 and 1, and it is only once you are among the Elite, which is made up of about 20 referees, that you can expect to participate in a tournament of this magnitude. I was promoted to Elite in January 2015. In fact, I was lucky enough to take part in a training course in Portugal ahead of the Algarve Cup, a competition that allows the FIFA to test referees. I stayed for three weeks and refereed a match. I was in the right place at the right time. Normally you start with a U17 or U20 World Cup. I started with the senior World Cup."

"We are in Rio, Brazil, the land of football. I also like other sports. I have only one regret, not to have participated in the opening ceremony because the football tournament was starting before, and I had been appointed as fourth referee on a match. But I was able to see the marathon, volleyball, and Teddy Riner's win. These are career highlights."

Stephanie Frappart, designated by FIFA to officiate the final of the Women's World Cup USA-Netherlands on July 7, 2019 in Lyon (Photo Philippe Desmazes/AFP).

"I had a bit of the weight of history on my shoulders. There were expectations, and not just on a personal level. If I had failed, maybe the door would have closed for other female referees. I had expectations, but I was not stressed. I knew Amiens and Strasbourg, teams I had crossed paths with at the National and League 2 levels. These two teams were promising. The players, coaches and managers were not surprised to see me. The most complicated thing to manage was the media, the environment rather than the match itself. I never go out on the pitch with the fear of doing wrong, I know that mistakes are part of the game and the VAR is there to help us when we make mistakes. On the other hand, the flood of media coverage, from the call on the day after the match, we cannot control it. Fortunately, the FFF's Communications department and Pascal Garibian, the Technical Director of Refereeing, was there to support me and had anticipated this reaction and helped me deal with it. Since then, things have calmed down. And I think that some situations are perhaps easier to manage when you are a woman than when you are a man. The players remain competitors. The frustration is there when a decision does not suit them. But there is a natural barrier. With words, the virulence of the attacks, verbal or physical, is not the same. In any case, I have never been confronted with it. Everyone has their own personality, their own strengths. Physical stature is not an asset on which I can rely to establish my authority. I have found balance by focusing on serenity and accuracy. I am no longer afraid of a skirmish. Not at all. I have already confronted these types of situations on other levels. Knowing how to handle them is part of the baggage of any referee."

"When you take part in a World Cup, for example, there is the possibility of refereeing the final. That is what happened to me a few weeks earlier when I had the honour of leading the final between the United States and the Netherlands in Lyon.

I had absolutely no expectation that I would be entrusted with the management of the European Super Cup. This Chelsea-Liverpool match came out of nowhere for me. I could neither dream about it nor expect it. There was pressure. My experience in Ligue 1 and the World Cup final helped me to put things into perspective. It was impressive of course, with the press conference before the match, and the large media presence the day before the match. I knew the expectations, I said to myself that the experience I had gained would be useful to me. And then, I was well surrounded by my two assistants but also by Clément Turpin, who worked the video assistance. With Clément, we have a friendly relationship. He is very accessible, always very attentive. He considered that this match was mine, he assisted me, provided compassion. He knows the pressure of these matches."

Stéphanie Frappart in action during the 2019 UEFA Super Cup final between Chelsea and Liverpool. Act 3 of an exceptional year 2019 for the French woman. (Photo Ozan Kose/AFP)