Through to the Euro semi finals

France have qualified for the semi-finals of Euro 2022 by beating defending champions The Netherlands 1 – 0 in extra time on Saturday July 23rd, in Rotherham. They will now meet Germany on Wednesday to play for a place in the final.

The game was always going to be tight, and this was certainly the case in terms of the score, but much less so on the pitch as France dominated their opponents, particularly in the first half. Occasionally on the verge of collapse and saved many times by their goalkeeper, the Dutch held on until they forced France into extra time. But a penalty from Ève Périsset ended the reigning European champions’ hopes of reaching another final.

Next up for France stand Germany, double world champions, gold medallists at the Olympic Games, and a record eight-time European champions. The semi-final is scheduled to take place on Wednesday July 27th at Stadium MK in Milton Keynes, kick off 9pm.

She then blocked a shot to her right from Kadidiatou Diani on the 14-minute mark, kept out a miscued clearance from her own defender Dominique Janssen in the 16th minute and managed to stop 2 long range efforts, firstly from Charlotte Bilbault and then Delphine Cascarino, pushing the ball out for a corner.

Finally beaten, her left post came to the rescue following a twenty-yard right foot volley from Cascarino on 27 minutes, and centre half Stefanie van der Gragt cleared twice on the goal line after attempts by Melvine Malard and Grace Geyoro respectively. 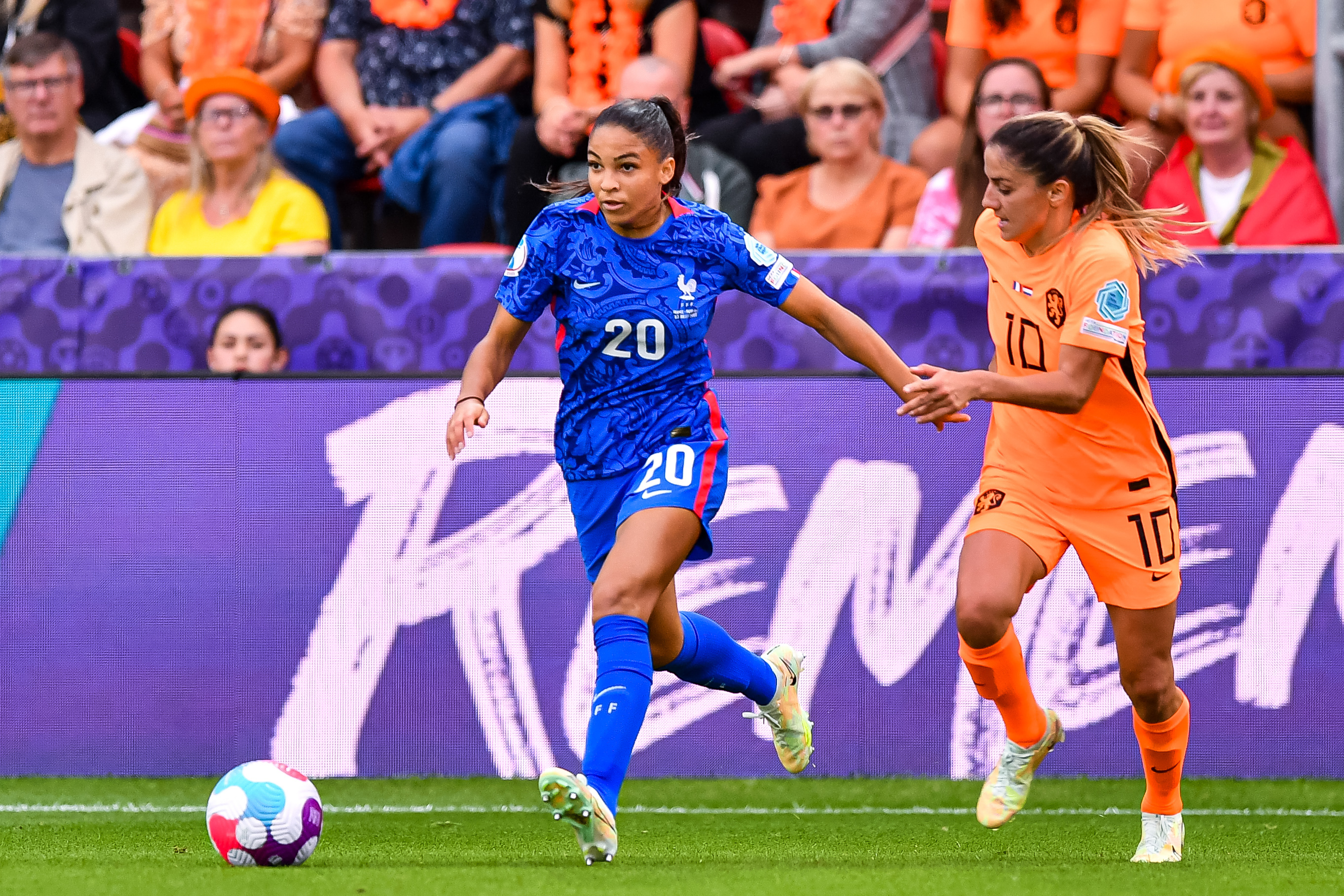 Coming out for the second half wanting to play higher and more directly, the Dutch created the first opportunity of the second period thanks to a header from Sherida Spitse from a corner, which was well caught by Pauline Peyraud-Magnin after 59 minutes. Wendie Renard came close from a similar move for France, before an effort from Selma Bacha and another Renard header saw France go close again.

The goalkeeper was called upon again in the 73rd minute after a shot from Bacha, but she was almost beaten by a header from Geyoro, who went close following a cross from Cascarino on 87 minutes (photo below). In the dying minutes France kept coming, with a tight angle shot from Cascarino after 3 minutes of injury time, and then a header from Renard from the corner that followed. 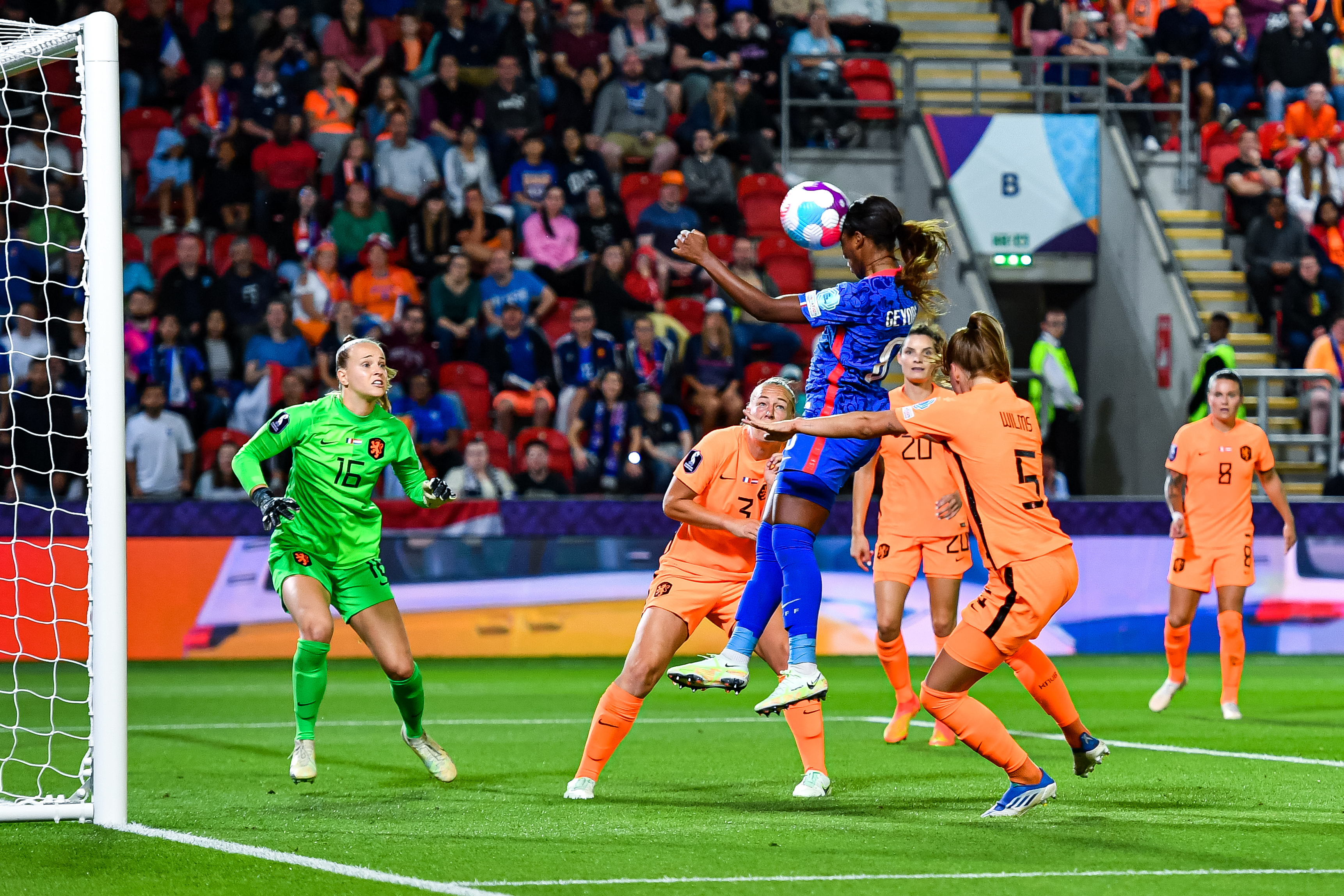 Extra time began with a good tackle by Renard to stop Mediema after 4 minutes. Bacha fired a shot over shortly after, before Diani, brought down in the box, was awarded a penalty after a VAR review went in the favour of France. Ève Périsset stepped up and scored, putting France in front on 102 minutes.

France controlled the rest of the match, only failing to widen the gap thanks to missed chances from Ouleymata Sarr, Marion Torrent and Clara Matéo. The final Dutch efforts were valiant but ultimately failed to halt France’s progression to a Euro semi-final for the first time in their history.

0-1, Ève Périsset: As she was headed towards goal, Kadidiatou Diani was brought down from behind by Dominique Janssen. The penalty was given following a VAR review and converted powerfully to the goalkeeper’s right.

Corinne Diacre (Coach of the French women's team, speaking to TF1): "We needed extra time and a penalty to win and to qualify. We struggled but I think the victory tonight is well deserved. On the penalty? My joy was contained because in the last match, the VAR was not in our favour. We had to wait for the decision (of the referee) before celebrating. We had a tough test and we responded well. We need to rest well because we go to the semi-finals in four days (against Germany, Wednesday). We played to the end and didn't give up, the team’s hard work has been rewarded. Selma Bacha (A second half substitute and named player of the game)? I asked her who she stole the trophy from (smiles)! She is part of a young group who give a lot, sometimes even a little too much. This passion is good for us. I even think that maybe these young players bring us luck”.